Amalfi coast is one of the most beautiful places in Italy and offers breathtaking landscapes without equal.

On top of the list of the destinations to visit there is Amalfi, which the most important monument is the Duomo that is located in the homonymous place and it was built around IX century. A picturesque spot where each corner, each street and place are characteristics. The old maritime republic is famous for its traffic, a past full of history, but especially for its art and traditions. In Amalfi is possible to visit the well-known Museum of Paper where many years ago was originally produced a precious type of paper still used today. Inside the museum there are machines and equipment to produce paper by hand.

One of the most suggestive places of the coast is Positano, famous around the world not only for its beauty but also for the handmade production of dresses and sandals, the original trend of the so called Moda Positano. What characterizes this place is the constructions of the houses along the rock. They all seem to be constructed on top of each other. Between the streets and the beaches in the heart of Positano there is the church of Santa Maria Assunta with its particular dome in yellow, blue and green majolica that it can be seen from anywhere in the city. The neoclassic structure between columns and domes, inside holds an important byzantine painting the Madonna Nera. The legend narrates that the painting came in Positano by the will of the Virgin. The colours and the scent that you breath in the little streets of Positano carries you in a magic atmosphere.

Going up the coast is located Ravello with its amazing gardens of Villa Cimbrione and Villa Rufolo which offer a stunning view and the particular architecture makes Ravello a treasure of the coast. In the central place there is the Duomo one of the most ancient cathedral of Italy and in it there are two museums: The Opera Museum with roman urns, relics and ancient artefacts, and the Pinacoteca of medieval and modern art enriched by paintings from XVI to XIX century. Each corner of this little village deserves to be visited together with other enchanting neighbouring places.

In the centre of the Amalfi coast there is Minori a location full of boutiques, shops, restaurants and the delicious bakery of Sal De Riso where to taste desserts and typical local products. Another two nearby villages are Cetara and Maiori. They are famous and popular seaside towns, quieter but equally full of history and attractions. The characteristic of these tree location is that they all have a large promenade/seafront and wider beaches.

Vietri sul Mare is well-known in the world for the productions of hand painted porcelain and its historic centre represents one of the main tourist attractions. Here there is the museum of ceramics, the factory of Solimene and the church of San Giovanni Battista in Duomo’s place which has a special majolica dome that seems to touch the sky. Besides ceramics there are two funny legends that tell the history of the two famous identical rocks in the sea “The brothers of Vietri”. The first one dates back to Greeks and narrates that while two shepherds were pasturing their flocks, they saw a girl swimming in the sea, when suddenly a storm broke out, they tried to save her in the waves but both drowned. The girl was the daughter of Poseidon the God of sea, she survived and his father to honour the sacrifice of the two guys transformed their bodies in two rocks that we still see today. The second one tells the siege by the Saracens to take the city of Salerno. After months of war two leaders fought until the decided to rest on two rocks, but they were captured by the sea and before drowning they found out that they had the same coat of arms on their armor and just before they died, they realized to be brothers, so the rocks were built in their honour.

How to get to Amalfi Coast:

Circumvesuviana: from Piazza Garibaldi take the line Napoli-Sorrento. Once arrived in Sorrento take the bus of line SITA

Train: from Piazza Garibaldi take the train to Salerno. Once arrived in Salerno take the bus of line SITA 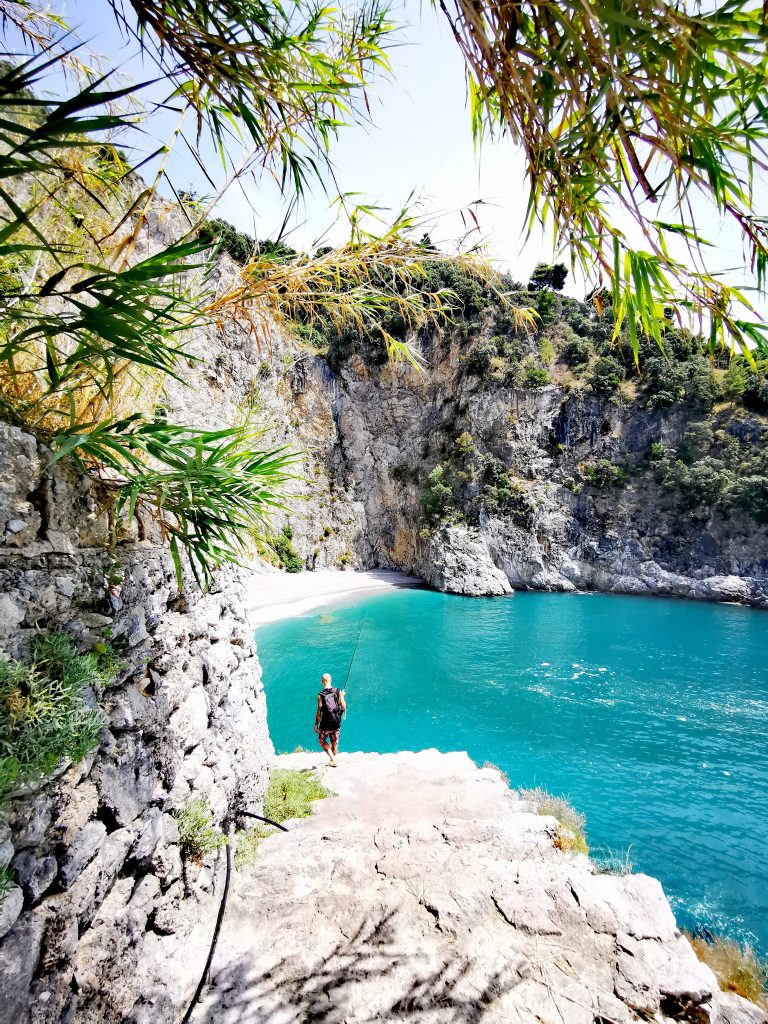 THE MOST BEAUTIFUL BEACHES IN NAPLES AND SURROUNDINGS
The city of St Gennaro
We use cookies on our website to give you the most relevant experience by remembering your preferences and repeat visits. By clicking “Accept”, you consent to the use of ALL the cookies.
Cookie settingsACCEPT
Manage consent

This website uses cookies to improve your experience while you navigate through the website. Out of these, the cookies that are categorized as necessary are stored on your browser as they are essential for the working of basic functionalities of the website. We also use third-party cookies that help us analyze and understand how you use this website. These cookies will be stored in your browser only with your consent. You also have the option to opt-out of these cookies. But opting out of some of these cookies may affect your browsing experience.
Necessary Always Enabled
Necessary cookies are absolutely essential for the website to function properly. These cookies ensure basic functionalities and security features of the website, anonymously.
Functional
Functional cookies help to perform certain functionalities like sharing the content of the website on social media platforms, collect feedbacks, and other third-party features.
Performance
Performance cookies are used to understand and analyze the key performance indexes of the website which helps in delivering a better user experience for the visitors.
Analytics
Analytical cookies are used to understand how visitors interact with the website. These cookies help provide information on metrics the number of visitors, bounce rate, traffic source, etc.
Advertisement
Advertisement cookies are used to provide visitors with relevant ads and marketing campaigns. These cookies track visitors across websites and collect information to provide customized ads.
Others
Other uncategorized cookies are those that are being analyzed and have not been classified into a category as yet.
SAVE & ACCEPT